The Podgor Development was the term given to a proposed shopping centre in Camberwell in the 1980s and 1990s. It was a controversial project that stimulated vocal opposition from local residents which eventually resulted in the development being abandoned.

Podgor Developments, owned by Floyd Podgornik, purchased a large site to the east of Burke Road, Camberwell, with approved plans and permits for a three-storey shopping complex from the National Mutual Life Association.

In May 1988, Podgor signed a long-term lease agreement with Camberwell Council following a council meeting on 16 May which approved the document. Hundreds of residents attended to protest the decision and stormed the meeting after councillors voted in favour of the agreement. Police were called to maintain order at the meeting, during which several residents were ejected and councillors were forced to retire to a back room.[1]

The lease's term was 75 years with two further 12 year extension options. The planning permit contained in the lease required the developer to provide a total of 2,230 parking spaces to cater for expected demand. Council would also pay a total of $2.3 million to Pogdor in exchange for providing 182 public parking spaces that would then be leased back to the City.[2] 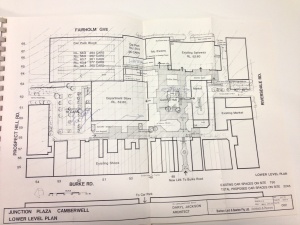 Part of the original 1985 floorplans of the development.

The proposal was formed around a three-storey shopping centre with underground car parking and associated landscape works. While it went through several iterations before its abandonment in the early 1990s, the key elements remained the same:

Save Our Suburbs (SOS) and other resident groups vigorously opposed the redevelopment plans. Camberwell-Hawthorn Planning Watch was formed in 1988 following the lease's signing. They described themselves as "...a number of local resident groups and individuals who were concerned about the future of the Cities of Hawthorn and Camberwell".[3]

The group used its considerable resources to produce an 'alternative proposal' assisted by Nigel Flannigan, a planning academic at the University of Melbourne.[3] Amongst other things, the proposal outlined the group's key reasons for opposing the Pogdor proposal, including:

This report sought to ensure that any future proposal was made "on the basis that Camberwell District Centre is at or near capacity".[3]

The group continued its activities to oppose the decision for many years, including protesting outside the Camberwell home of a National Mutual Director.[4]

Camberwell Council held its annual election for one councillor in each of its four wards. Camberwell-Hawthorn Planning Watch ran its members as candidates in each ward and ousted all four sitting councillors who supported the Podgor development. Sitting councillors were supported by a media campaign paid for by Podgor including television and radio advertisements. The election result meant that the new council were now seven-to-five against the proposal.[5]

Following the 1988 election, the new council sought to extract itself from the deal struck with Pogdor. It formally withdrew from the contract in September 1989[6] and was eventually forced to pay Pogdor Developments $25 million in 1992 after it unilaterally backed out of the deal and was sued by the company.[4] This followed a failed appeal to the Supreme Court of Victoria in April 1992.[7][8]

This put the City of Camberwell in a tenuous financial position which almost bankrupted the council.[9] Although the council planned to pay the money buy selling properties and avoid increasing rates, when the council was amalgamated into the City of Boroondara, the new council introduced a one-off rates increase to pay the costs associated with the settlement.[10]

This situation resulted in an investigation into Camberwell Council by the State Government.[11] It also contributed to the council's dismissal by the state government following the investigation in 1993.[12]

Following the dismissal of councillors, administrators sold a series of properties and reorganised the Council's finances. Those properties sold were:[9]

Other measures taken to rectify the financial issues included:[9]

These and other actions taken resulted in a budget surplus rather than forecast deficit.

In the midst of the controversy, the founder and owner of Pogdor Developments, Floyd Podgornik, committed suicide in his Melbourne apartment on 4 March 1990.[13][14] The CEO of Camberwell Council, Brian Jones, also passed away in 1992.[15]

The Camberwell Fresh Food Market and Camberwell Sunday Market continue to operate on part of the land where the development was proposed.[16] The at-grade council-owned carpark also remains on the site.